Bolero, by Riedel: “Now you need less to achieve more” 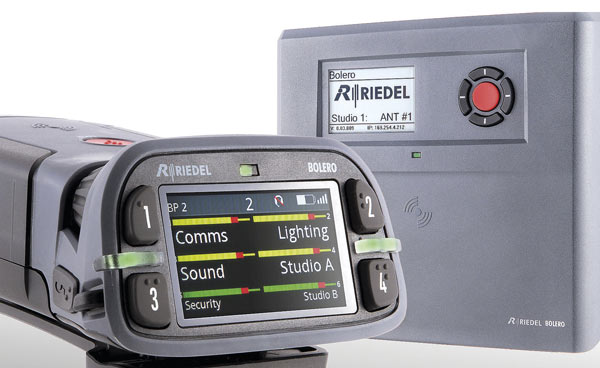 Bolero is the renowned and prestigious Riedel intercom system, a German manufacturer of broadband signal distribution systems, data communications and transport whose products have been justly lauded and have attained an undeniable position in the most demanding production environments the world over.

Since its launch in 2017, Bolero has stood at the fore by providing a collection of unique features that no other similar product can match. Some of the differential characteristics came into being in the Artist system of support matrixes and control of audio signals within Riedel itself, which significantly conditioned the investment required to be able to enjoy the excellent equipment.

Thus, it is in this sense that the new feature unveiled in the most recent NAB in Las Vegas and what means that nowadays, Bolero needs less to create more: the standalone version, fully operational without needing anything other than the antennae network or any Artist matrix in the kit.

Yet, first, let us delve inside the Bolero, regardless of its set-up. It is an intercom system based on DECT radio technology, operating on the 1.9GHz band and which, as is common in this type of device, does not require the granting of any licence for its use. It features the same technology as that used on mobile telephones, whose security and reliability are more than proven. The equipment can function interchangeably as a wireless belt-pack transmitter (with its different earpiece models: single, double, open, closed, and diverse microphone styles), or as a wireless dashboard. Yet it can also function as a radio walkie-talkie, establishing earpiece-free communications thanks to its built-in microphone and speaker, a feature that no other product on the market boasts. Amongst the main aims of its design, a user-friendly approach to operating, set-up, reliability and security were considered paramount. Proof of this is its selection for communications environments of the most demanding, such as Formula One or the new BBC studios in London to get an idea of its potential. If we think about Formula One, for example, we need to guarantee that our communications are reliable in a saturated radio-electric spectrum environment, with possible interference from all types of signals, meaning we can always ensure seamless communications between members of the same team, though beyond the reach of the team in the box alongside us using the same device. With this in mind, we begin to comprehend the level of demand it is capable of handling and overcoming.

In its set-up as an Artist matrix, the centralised audio control equipment of the actual Riedel device, communications are performed using standard IP networks with AES67 protocols, connecting the antennae in a decentralised manner via AES switches to the matrix to create a distributed network in which the wireless belt-packs will make automatic and clear commutations between antennae (roaming) similar to the way our mobile telephones do. In this way, the antennae keep the connection with the belt-packs recorded in our network, irrespective of their own movements registered.

Thanks to smart use and the methods of frequency assignation, each antenna can generate up to ten belt-packs, with the system’s limit of 100 simultaneous antennae with up to 100 belt-packs in total. The antennae are devised with PFGA reprogrammable systems so that they can be updated with new protocols and standards if required.

Read the whole article at:
https://issuu.com/daromedia/docs/tmbroadcast61