Fujifilm recently hosted a web event in which presented a number of 4K and 8K-related innovations.

The UA107x8.4 AF incorporates a newly developed phase-detection auto focus sensor, achieving fast, tack sharp images with a response speed as fast as 0.45 seconds and “boasting an outstanding capability” in tracking a moving subject. The lens also features the company’s proprietary image stabilization mechanism and a 107x ultra-magnification zoom that covers focal lengths from 8.4mm to 900mm (1800mm with 2x).

In addition, the company announced the development of two additional Jujinon 8K broadcast zoom lenses. The FUJINON HP66X15.2ESM (HP66X15.2) box lens reaches the “world’s longest” 8K focal length of 1,000mm while also featuring the” world’s highest zoom” magnification of 66x . The FUJINON HP12X7.6ERD (HP12X7.6) is a portable lens covering a range of 7.6mm to 91mm, the “world’s widest” 8K angle of view at 93.3 degrees. The lenses are due to be released in the summer of 2020 and the fall of 2020, respectively.

The HP66X15.2 and HP12X7.6 ultra-high-definition (UHD) lenses feature bayonet mounts targeting three 1.25” sensors for ultra-high 8K resolution. This is bolstered by Fujifilm’s multi-layer coating (High Transmittance Electron Beam Coating). In addition to using aspherical and fluorite elements to control various types of aberration, both lenses have a nine-blade aperture for natural bokeh and are equipped with 16-bit encoders. The HP66X15.2 also features a high-performance optical image stabilization mechanism. Both lenses can be used with the latest generation of focus accessories to achieve the advanced level of focusing precision that 8K demands.

Last but not least, Fujifilm told us that is developing two advanced technologies for most Fujinon 4K and 8K lenses. The ARIA (Automatic Restoration of Illumination Attenuation) technology technology works through a sharing of lens design characteristics and positional metadata between the FUJINON broadcast lens and the camera. In the optical design of broadcast lenses, engineering trade-offs must be made to provide desirable zoom ratios at usable size and weight. As a result of these compromises, two major optical phenomena have always existed. The ARIA feature eliminates both. The first optical phenomenon is F-Stop, or exposure ramping, at the telephoto end of the zoom. With ARIA turned on from the camera remote control panel (RCP), the lens transmits the known focal length position from internal 16-bit encoders and the F-Stop/exposure ramping curve. In turn, the camera introduces the appropriate amount of gain to seamlessly counter the darkening of the image, resulting in consistent exposure level throughout the zoom range of the lens.

The second phenomenon is known as relative illumination, a result of all lenses being slightly brighter in their “sweet spot” at the center than at the edge of the image. In instances when this is visible, it is often referred to as corner shading or portholing. With ARIA turned on, the lens communicates with the camera, providing relative illumination data throughout the full range of the lens, which then corrects the corner shading, giving the picture a consistent, flat illumination from the center to the edges of the image.

On the other hand, RBF (Remote Back Focus) can be operated by the video operator in the OB van or control room via the camera RCP and does not require that anyone be at the camera position. The video operator has complete control of the zoom, servo focus, and back focus functions of the lens from the standard camera RCP, thereby having the ability to remotely adjust the back focus and calibrate the optical system to ensure optical performance from all camera positions at all times. With RBF, back focus can now be set at any time or place, even when the camera operator is not available, if the lens is not accessible by a person, or it is not safe to access the lens.

The following new and current FUJINON 4K and 8K lenses are compatible with the ARIA and RBF functions, respectively: 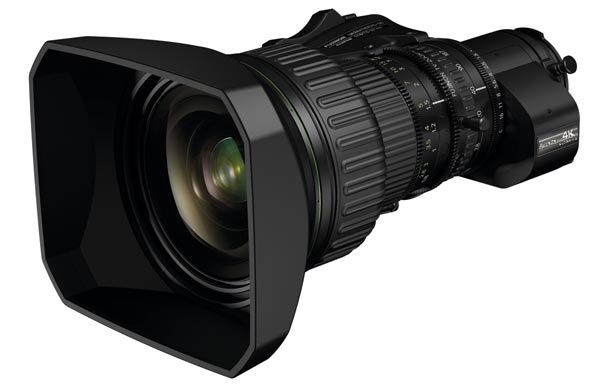