VoIP III: from theory to practice

To close this Video over IP trilogy we are going to start by reviewing a little bit of history in order to reflect on the past and what has brought us here. Without this perspective, it is difficult to understand the current environment and technologies and their raison d’être. In short, IP is somewhat disruptive but it will coexist with current SDI environments and it should be this way for a long time.

It seems that now we are all faced with the dilemma of having to choose between SDI and IP. SDI is considered the most robust, reliable and interoperable video signal exchange mechanism available, the result of the digitalization of linear analog video signals. If we go back a little further in time, we find the really ancient standard SMPTE ST-125 as a predecessor of SDI, which laid down the standards for the exchange of 525-line and 625-line 4:2:2 digital signals. Sounds archaic, doesn’t it? Well, even in those days ST-125 serial interfaces coexisted with SDI for a while, even though the latter was a clear step forward.

In the case of IP, it is not an evolution of SDI but rather and adaptation of an existing technology to our signal exchange environment. SDI has not been redesigned to make it evolve, but we have looked instead at other existing technology in order adapt it and adapt ourselves to it. That is why the choice of SDI or IP is not such, but we must instead know and understand both worlds to make the correct combination, not the correct choice, and benefit from the advantages that both technologies offer.

As it happens with early adopters of IP technology now, it wasn’t easy for early SDI daredevils either. Starting with the problems related to cabling, not all coaxial cables worked well and their length was highly limited; even quality losses caused by incompatibilities in chrominance information processing. The beginnings were not easy. Doesn’t this ring any bells? It is almost the same thing that has happened with the adoption of IP: Compatibility issues, signal format, cabling, etc. So not everything is new in IP, as the challenges are similar to those of years ago.

Half-way through the life cycle of SDI, HD appeared, imposing new needs and forcing a transition to 1.5 Gbps and even 3 Gbps interfaces -when dealing with progressive signals- which introduced yet a further degree of complexity. And close to the end of the development of SDI -at least for now- new “standards” such as 6G-SDI or even 12G-SDI were necessary in order to be able to accommodate UHD signals through coaxial cables, so interoperability was once again a problem.

The IP in broadcast

As we have already analyzed, and not only in this trilogy but also in countless previous articles at TM Broadcast, IP offers great potential for our industry, but we must know how to make the most of it and not get carried away by fashion. The IP is just a transport method, nothing more. It is neither our own technology nor does it offer an added value beyond conveying the signal through equipment and standard data links between systems. But the point is that the last sentence has great implications and a lot, quite a lot of potential.

The ST-2110 standard really made it possible to take advantage of all this potential and put at the service of our industry everything that a signal transport method based on packet data can offer us. IP technology is very, very mature. It has been evolving for over 50 years and adding new capabilities, which has now turned it into an option for the transport of video signals.

And the thing is that our technology, seen from the standpoint of the amount of data and information that is being handled, is not trivial at all, but entails a great challenge. Who has a 1.5 Gbps Internet connection at home? Nobody, or maybe hardly anybody. Well, all that bandwidth is necessary to for conveying a single, uncompressed video signal. Not to mention UHD, starting at 12 Gbps, even more if we move up to definitions such as 8K. What can we do with Internet connections featuring those speeds? I remember that my university would connect the entire campus to the Internet by means a 1 Gbps connection, and we were already 10,000 students back then. The Internet connectivity necessary for an entire university campus is what is required to convey a video signal, and in the EURO 2020 more than 35 cameras per game have been used, almost the bandwidth of a small town.

Compression, our most feared enemy

I know I am trivializing, but I think this is a good reflection in order understand why it is reasonable -as long as quality is guaranteed- to contemplate compressed signal exchange environments. But there is no need at all to pull one’s hair out for this reason. Nowadays the available codecs prevent the variable latencies present in the past, since most of the compression is done by hardware and not by software. Furthermore, these codecs feature such good quality that makes it visually almost impossible to tell a SDI signal from a compressed one.

If we use the latest H.266 codec with a bandwidth of 30 Mbps -100 times less than 3 Gbps- we obtain an image quality for 1080p50 SDR definition, for instance, which allows us to even process the image in post-production without any major problems. Production environments, including contribution and distribution of compressed signals, are no longer the future but the present and therefore, they should be considered for adoption as soon as possible. Although all that glitters is not gold. IP has still some way to go before it is considered as robust and interoperable as SDI is today. Because in view of such fast-paced developments, standards are not able to keep up with the speed and manufacturers struggle to implement all these improvements in their products. All this rapid evolution leads to an uncertainty that sometimes delays the launch of new developments and products due to unwillingness to run the risk being the first one and then failing. Which is completely understandable.

In this environment emerged NMOS, an IP-based protocol with compressed signals that makes the exchange of signals between equipment units feasible, thus increasing interoperability. A big step forward but one that still has limitations, and not all manufacturers have adopted it. For example, other proposals such as NDI are equally valid and have to be considered. Time will tell us which is the correct option or whether a new one appears that will take them all in. We all want that.

It is not uncommon to find -in fact it is most usual- that in a given production environment hundreds of signals are combined. From cameras to signals produced from various sources such as graphics, audio as well as control signals. All these combined within an IP network result in increased complexity and therefore in more demanding bandwidth requirements.

This is something new for IP environments. Not the data to handle, but doing it all together with such high bandwidth requirements. That is why certain protocols and even equipment such as switches and routers have had to be adapted to become “media-capable”. And now the environment is much more mature than before, something to enjoy.

Finally, there is the whole area regarding corresponding to the synchronicity of the signals. What began as our famous blackburst or Trilevel signal is now PTP signals that are used throughout the network to synchronize all our streams and avoid problems when using them together.

SDI exists and will continue to exist for a long time as it remains the best technology for many uses and daily productions. And although it may seem to us that it is easier to use than the IP environment, this is only based on our experience working with it, nothing else.

The technology is mature enough by now, we just need to finish adopting it and for the strange profiles of broadcast IT engineers and technicians to become widespread as we acquire the necessary knowledge to standardize it as much as SDI or even more so.

There is no longer a problem in handling networks carrying 400 or 800 Gbps with standard equipment to accommodate any production environment. It is evident that SDI has limitations in basic issues regarding signal and installation management and IP does not, but the latter needs to mature some more and we have yet to acquire the necessary knowledge to adopt it; therefore they will both coexist for a long time.

SDI is not better than IP, just like IP is not better than SDI. They are different environments that must coexist and be used optimally wherever needed. The clearly best approach is getting to know both, which will be a must in the near future. Let’s go for it. 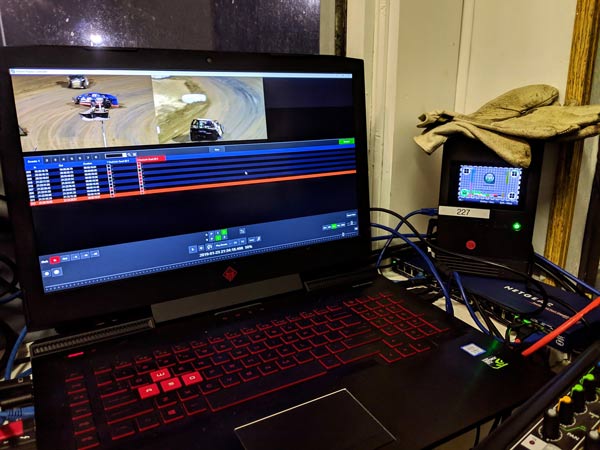